Picture of the Day

So, to replicate the highly success and awesome thread on the FH2 forums, I'd like to inaugurate the Traction Wars Picture of the Day thread!

To quote the rules from the FH2 forum's thread:

The rules are:
- One picture per member per day.
- Only pictures relating to the Second World War are allowed.
- Only posts with pictures and discussing the pictures are allowed.
- Posts in violation of these rules will be deleted without warning.
Click to expand...

And to start us off: 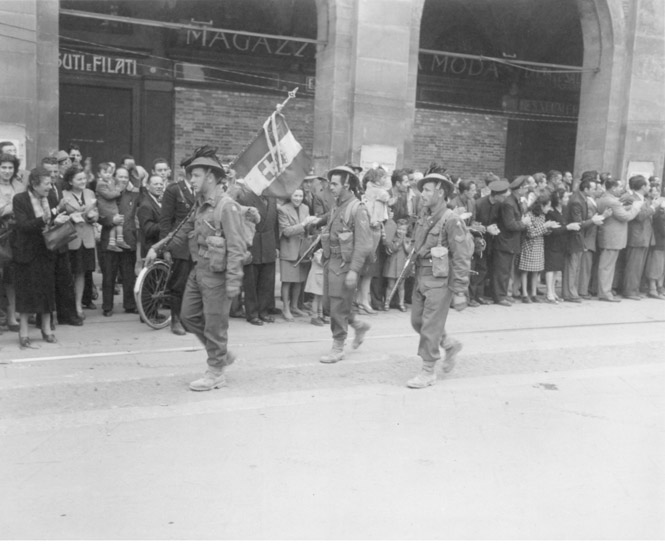 Bersaglieri colour guard of the Italian Corps of Liberation parade through Milan in 1945 after its liberation. The Italian Corps of Liberation (also known as the Army of the South) fought on the allied side from Monte Cassino through to the end of the war, earning much esteem from their allied colleagues, and being rapidly expanding from a brigade to a full corps in size by the end of the war. After they were pulled off the line after Monte Cassino, they were switched from their italian uniforms and weapons, and reequipped with british uniforms and gear, although they clung to their italian status through the continued wear of italian insignia. As seen in this picture, the Bersaglieri units continued to wear the feather plume, albeit on british helmets.
L 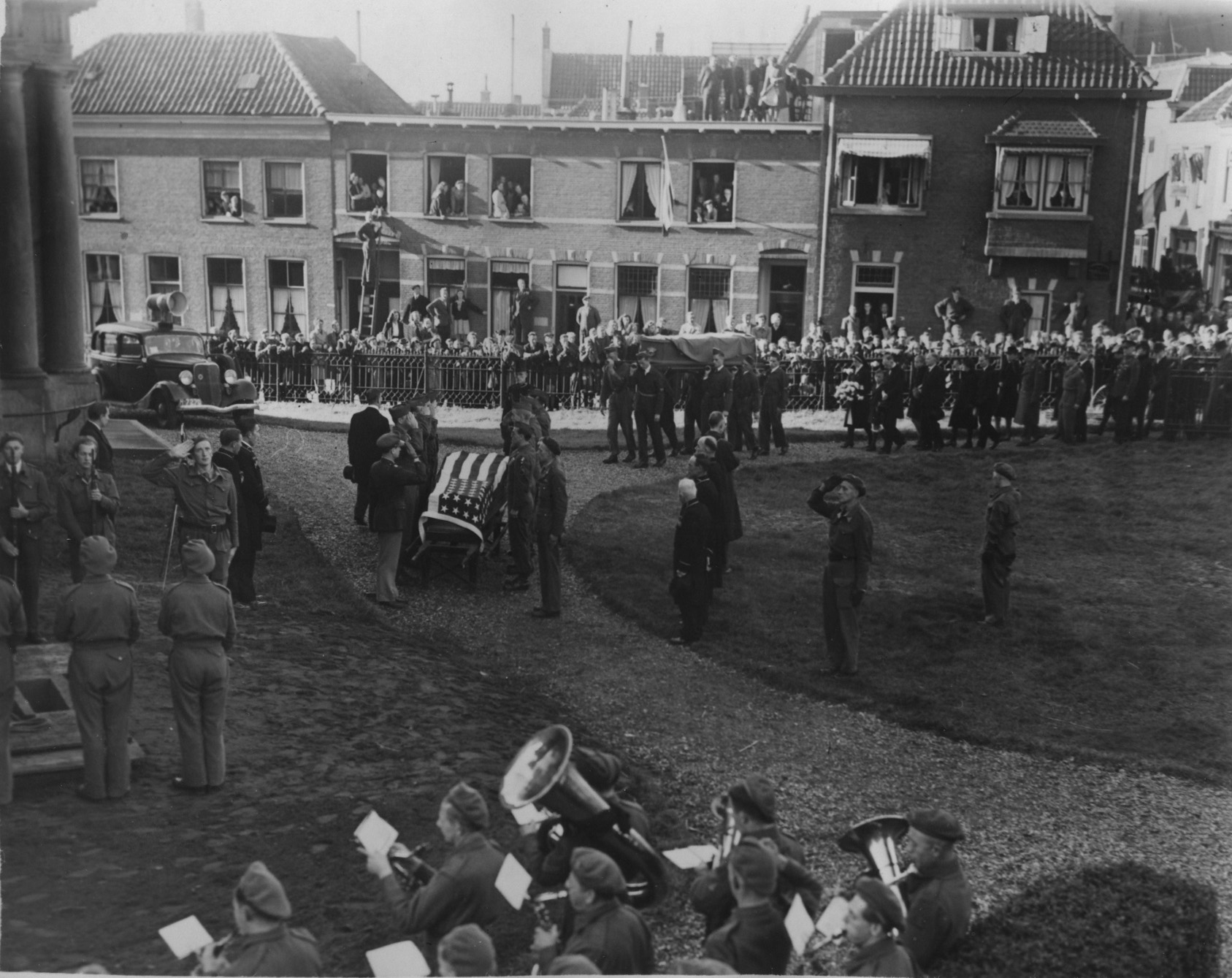 This is taken in the street I work in. It's 31th oktober of 1945 at the reburial of American soldiers and 3 members of the "Members of the Interior Forces", I just put this in google translate but I think it looks valid.

And well.. I just think it's a nice picture

There are 2 more pictures taken in the same street but rules are rules. Maybe tomorrow
Last edited: Aug 8, 2013 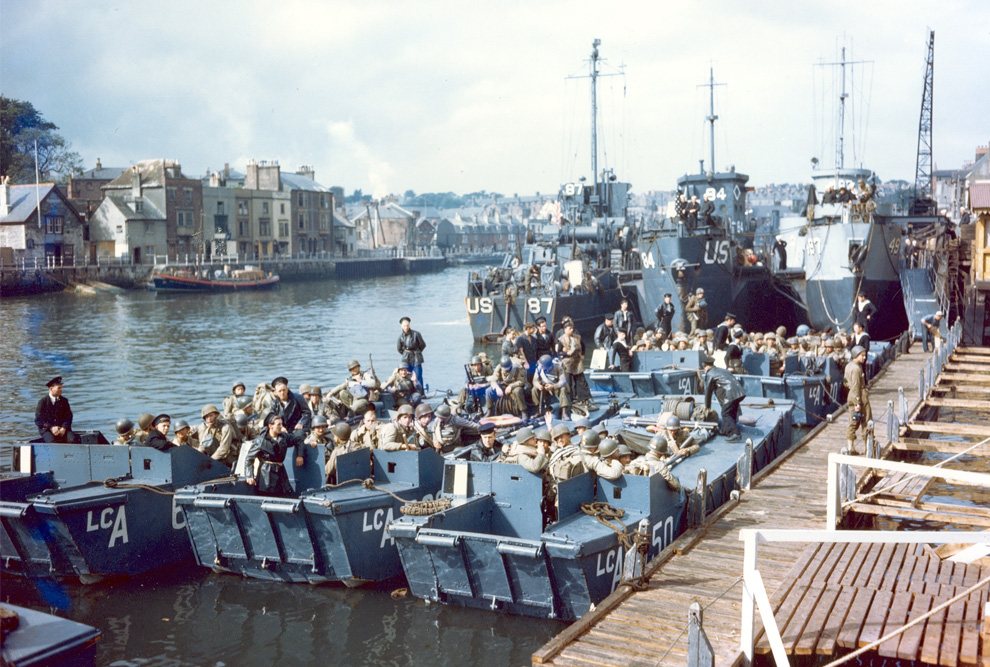 Because a cup a tea eases the nerves!

Pretty much self explanatory.

I just thought this image is pretty badass, eh?
L 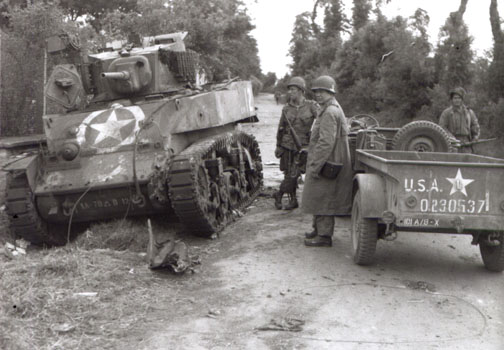 This picture is taking at dead man's corner. The location got it's name becaus they claim ( I've just read it might not have been ) there was a dead body hanging out of the tank for days, and the soldiers started reffering to it as a position.

These days there is a museum about the whole event and its surrounding in the origional building. What in my opinion was kind of special about this place is the fact that they left the rooms untouched, which results in the fact that the actual bulletholes and blood spatter can still be seen. 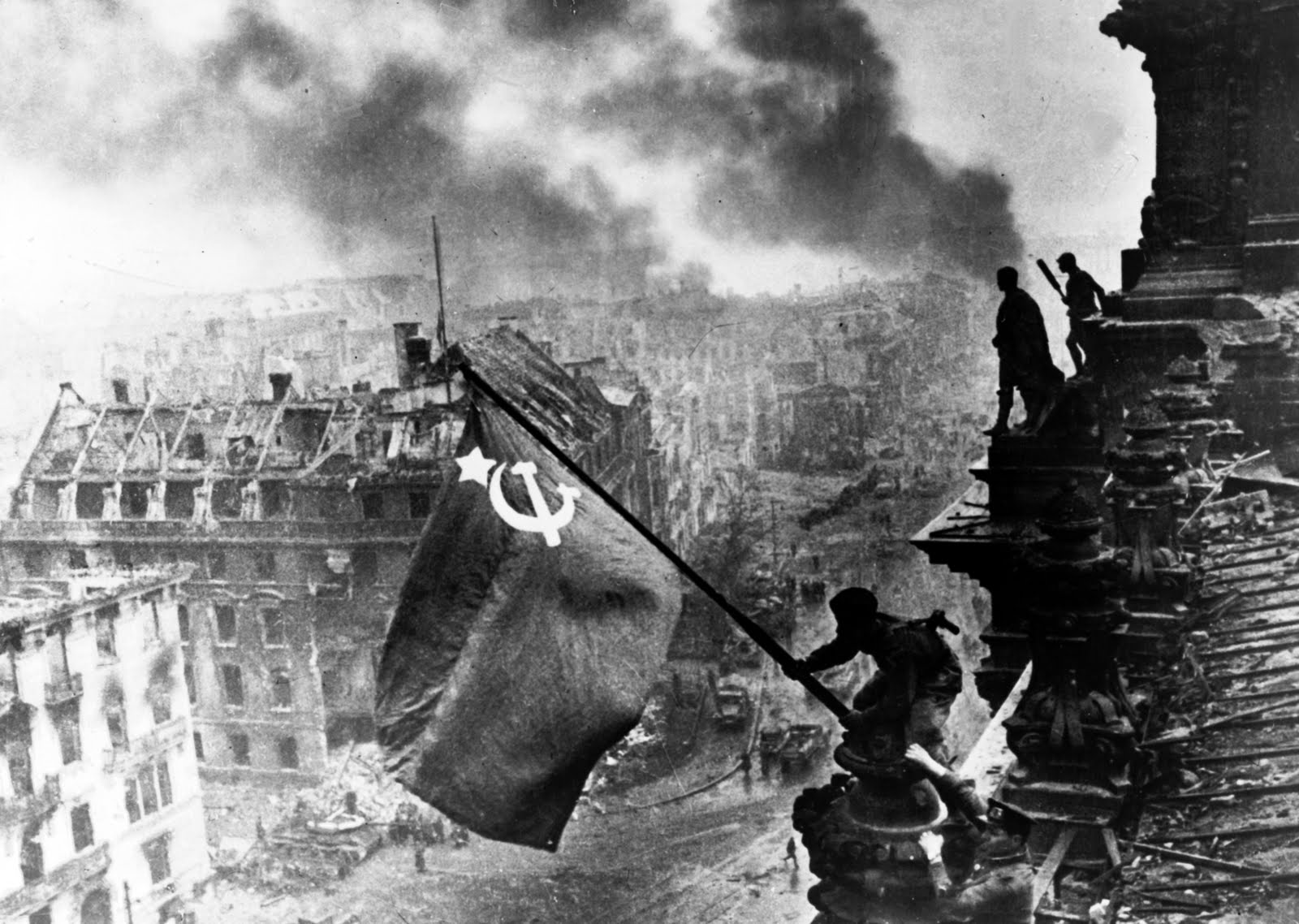 A damaged Polish armored train carrying tanks captured by the 14th SS-Leibstandard Adolf Hitler Division, near Blonie, during the invasion of Poland in September of 1939.
Click to expand...

That is actually train no12 "Poznanczyk." It was blown up by it's crew after the rail lines it operated on were cut, and it was unable to pass through others due to jam ups of evacuation trains. The damage was caused by internal explosions set off by the crew.

On 31 August 1939, train nr. 12 was assigned to the 56th Inf. Rgt. of the 25th Inf. Div., guarding the approaches to the small town of Krotoszyn. Since the early morning of 1 September 1939, the train supported Polish units defending Krotoszyn, among others bombarding German infantry at Cieszków (Freyhan). Since 2 September, it was ordered to co-operate with Wielkopolska BK (Cavalry Brigade), and was used mainly on patrol duties.
On 5 September, the train was ordered to Warsaw. It was difficult, however, to drive the train through damaged lines. On 7 September, it became stuck near Sochaczew as a result of lines blocked by evacuation trains, reaching from Sochaczew to Blonie. On 9 September, still in that area, it fought against a German 'task force' of the 24th Inf.Div. trying to capture a ford across the Bzura River in Sochaczew. In the first few minutes, the train destroyed 7 enemy vehicles. When the Germans gathered their artillery, they managed to set one wagon on fire, and the train was forced to retreat to Blonie. Later that day, when the attempted breakthrough to Warsaw failed, because the line was captured by the reconnaissance unit of the 4th Pz.Div., Cpt. Majewski ordered to leave the train and destroy it. Most of the crew broke through to Warsaw. As is evident from the photos, the train was blown up and too heavily damaged to be repaired by the Germans.
Click to expand... 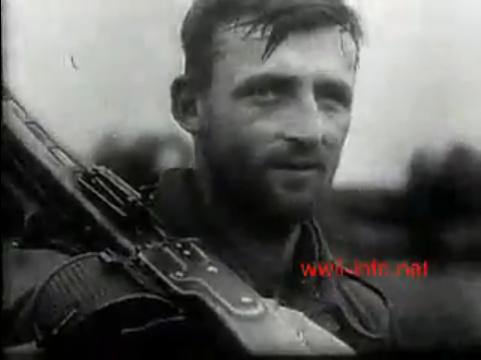 German gliders at the fort of Eben-Emael, May 1940

Back from vacation and only one photo posted after me? For shame! 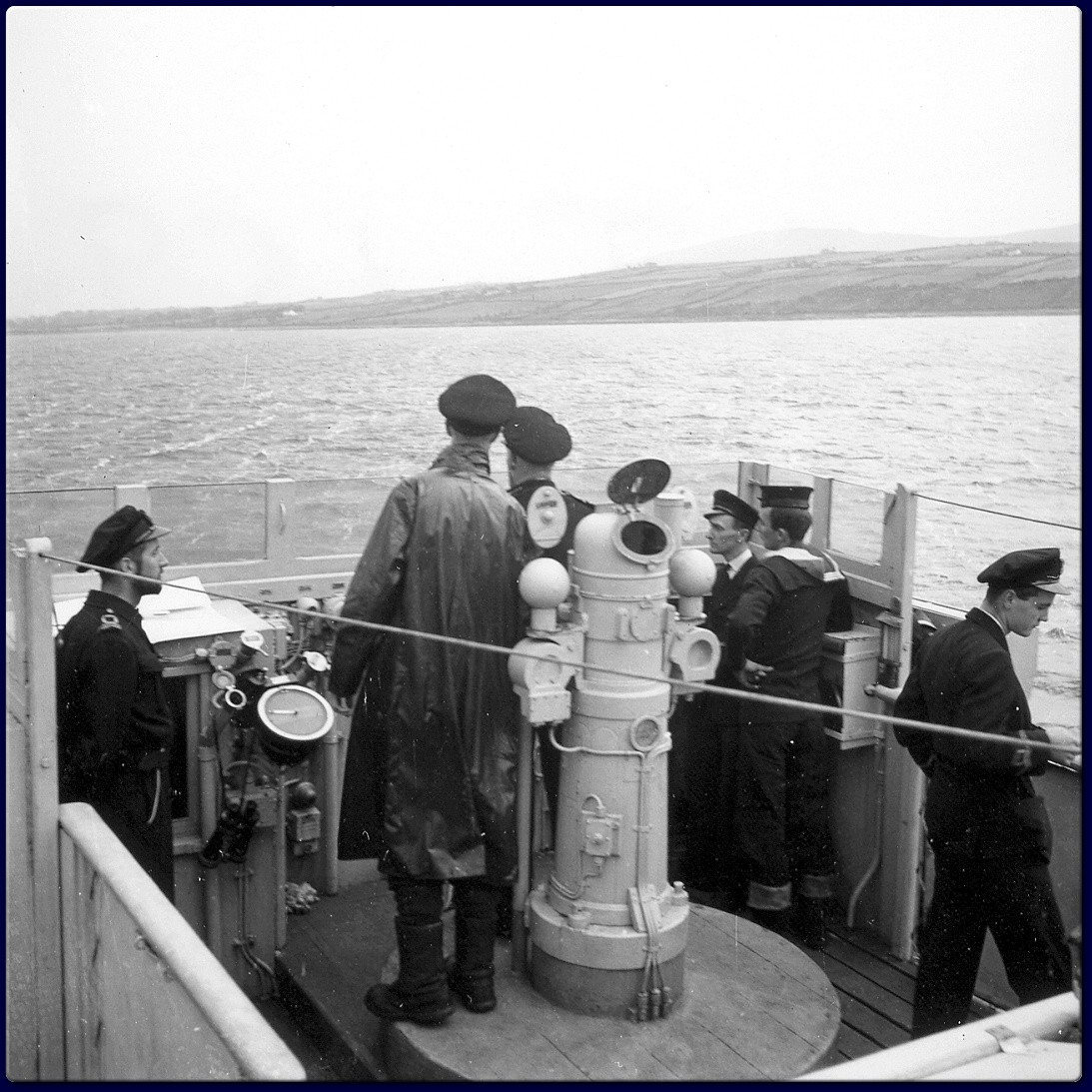 The bridge of the HCMS Trillium, a Flower-class Corvette in the Royal Canadian Navy. She escorted a great many convoys in the war from Halifax to England, and took part in the last HX Convoy of the war. She survived the war and was later sold off to the civilian market.

The German cruiser Blücher, a few moment after the 2nd. torpedo-impact from Oscarsborg Fortress, that knocked-out her ability to maneuver after taking heavy-fire from the two 28 cm. Coastal Guns sitting on top of the same island. After the 2nd. torpedo struck her, she immediately lost all chances of getting ashore safely, resulting in an estimated 650-800 casualties, as well as 550 taken temporarily as prisoners.

The result of Blücher's failed and delayed attempt to dock and take control over Oslo, was a key-factor that prevented the Royal Family, the Cabinet and the sitting Storting, as well as the national gold reserve to be captured and seized; all thanks to newly trained recruits, old veterans and old weaponry.

Picking up an Arado Ar 196 floatplane on board the Prinz Eugen. Date unknown. Probably during training exercises, given the tranquil water. 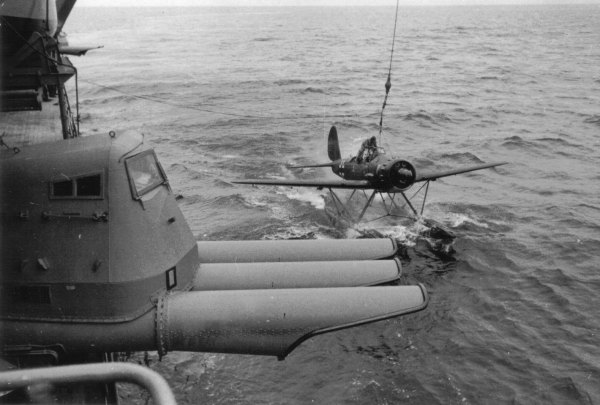 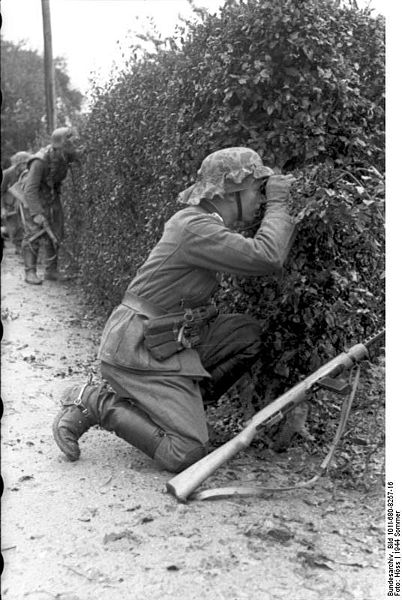 German Heer troops in Normandy. The interesting bits in this:

The officer in foreground is using a piece of american camo parachute silk as a helmet cover. He is also carrying a Beretta SMG, and has riding spurs on his jack boots.

The NCO behind also has a Beretta SMG

No posts? For shame again!

A jumble of German tanks knocked out during the battle of Mokra by the Wołyńska Cavalry Brigade on the first day of the September Campaign. In total the Poles knocked out around 100 tanks (50 destroyed beyond recovery) and an equal number of armoured cars, dealing a severe defeat to the 4th Panzer Division.

German tank crewman from Panzer-Regiment 36. - Hartie Effenberg - in his memories wrote about his involvement in the battle of Mokra:

"We crossed the German-Polish border after 12:00; probably in third or fourth wave. Our unit stopped in Wilkowiecko and was waiting for further orders. (...) From the battlefield to Wilkowiecko they were constantly bringing wounded soldiers, it was the first time I saw such severely burned people. I had got some bad misgivings, I was scared. (...) Then the order to fight came. I prayed to God to protect me. I started. (...) Everything around me was burning, tanks crashed during the morning attack were smoking, ruins of houses were burning out. Only small church remained and that small church - among oaks - I could see in my viewfinder on the right, when our tank - driving at full speed, shooting from the gun - crashed a Polish tankette. (...) We received enemy machinegun fire - but ineffective - on our armour. (...) The commander - Kurt Scheele - was constantly pressing the loader, we were conducting a constant fire from both our machineguns and gun towards shooting to us from the right side enemy battery [...]"

After a moment Effenberg's tank was blocked between two other eliminated German AFVs and soon after that it received a side hit from the Polish gun. The commander of the tank - Kurt Sheele - managed to open the hatch and pull out heavily wounded Hartie Effenberg (he lost his leg) from the tank - but soon he (Kurt Sheele) was killed. Hartie Effenberg survived the battle.
Click to expand...

Also, there are at least 3 known Polish anti-tank aces from the battle:

Żłób, Leonard - corporal (3 battery of 2. horse artillery dyon) - 14 victories (tanks) by direct fire from 75mm type 02/26 field cannon - in the combat between buildings of Mokra II and Mokra III - during the German attack in strength of over 80 tanks which beginned around 12:00. Leonard Żłób was awarded with Virtuti Militari cross for this combat.

Suski, Jan - corporal (AT platoon of 2. horse rifle regiment) - 8 victories (tanks and AFVs) by direct fire of 37mm type 36 AT gun - during the combat near the railway near Mokra II (while repulsing the German attack which started around 15:00).

Kawiak, Jan - uhlan (AT platoon of 12. uhlans regiment) - "several victories" (tanks) by 37mm type 36 AT gun - during the combat at the forest clearing near the railway, while fighting with attacking German tanks from his well-hidden position under the railway viaduct. Immediately after succesfully repulsing the German attack he was promoted by lieutenant colonel Kuczek to the rank of lance corporal.
Last edited: Aug 20, 2013

"Charlie Brown
was a B-17
Flying Fortress
pilot with the
379th
Bombardment
Group at
Kimbolton ,
England . His B-
17 was called 'Ye
Olde Pub' and
was in a terrible
state, having
been hit by flak
and fighters. The
compass was
damaged and
they were flying deeper over enemy territory instead of heading home to
Kimbolton.
After flying over an enemy airfield, a German pilot named Franz Steigler was
ordered to take off and shoot down the B-17. When he got near the B-17, he
could not believe his eyes. In his words, he 'had never seen a plane in such a
bad state'. The tail and rear section was severely damaged, and the tail
gunner wounded. The top gunner was all over the top of the fuselage. The
nose was smashed and there were holes everywhere.
Despite having ammunition, Franz flew to the side of the B-17 and looked at
Charlie Brown, the pilot. Brown was scared and struggling to control his
damaged and blood-stained plane.
Aware that they had no idea where they were going, Franz waved at Charlie
to turn 180 degrees. Franz escorted and guided the stricken plane to, and
slightly over, the North Sea towards England. He then saluted Charlie Brown
and turned away, back to Europe.
When Franz landed he told the CO that the plane had been shot down over
the sea, and never told the truth to anybody. Charlie Brown and the remains
of his crew told all at their briefing, but were ordered never to talk about it.
More than 40 years later, Charlie Brown wanted to find the Luftwaffe pilot
who saved the crew. After years of research, Franz was found. He had never
talked about the incident, not even at post-war reunions."